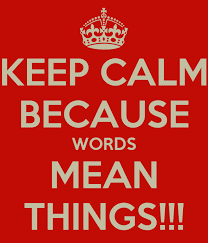 Anti-racism = racism
Anti-fascist = fascist
Bigot = Someone who doesn't share your opinion
Racist = Someone who doesn't share your opinion
Right wing = patriot who supports the US Consitution
Right wing extremist = patriot who supports Constitution and hates its those dedicated to overturning it
White supremacist = Someone who doesn't share your opinion
black lives matter = nothing at all. Nobody believes that
gun control supporters = communists and fascists who hate America
hate speech = doesn't exist in this country and is not against any law
critical race theory = racism. It's pure racial hatred
Black power = Shame. Imagine shouting White Power instead and see what happens to you in free America where there is no such thing as hate speech
white rage = a myth. If it was real you would know it
white fragility = a myth. If it was real you would know it
fact checker = ignorant liar
CDC doctor = ignorant liar
politician = liar
senator = liar
Congressman = liar
spokesman = spinner and liar
soft power = you're the ATM for other people/countries
global warming = a scam of biblical size and fell intent
climate change = a scam of awesome proportions filled with stupid
set asides = discrimination
quotas = discrimination
safe spaces = discrimination
stereotypes = an association in the mind that forms sets of things that are alike