THIS PICTURE SAYS EVERYTHING

Norhing I could write or say changes what this picture shows about the upcoming future of American Special Operations. She could be with SOAR or one of the other specops flying worlds and to be honest I don't really know if the women pilots have the right stuff. I'm not talking about matching the men who are the run of the mill specops pilots. I'm talking about the guys like Stretch. Above and beyond is supposed to be the norm for them. My experience was other but I did not fight in Afghanistan where uncommon valor was a common virtue. I can accept that I could be wrong. The problem of course is, 99% of Americans have no idea what is asked of pilots when it comes down to 'above and beyond' the call of duty. I know some guys have it. Not all by any means but enough. In spec ops, like most military ops, failure is measured in blood. That they will willingly shed theirs? I have no doubt. 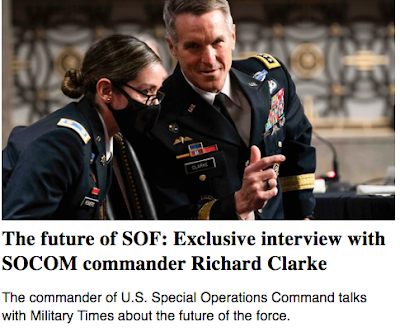 I'm reminded of taking a ship into Victoria at 3 in the morning with Green Peace trying to use their helpless pink bodies in zodiacs to keep us from moooring after a thousand miles of journey with the bars closing and the Canadian pilot simply saying, "run over them, we have more than enough." He also talked about our electrician up at the top of the mast as we pulled into port replacing lightbulbs in the ship's over and above lighting aray from the mast. "They're crazy. You can get the very young to do damned near anything." It was, on reflection, a very Canadian saying. The question is, would the women run into the flames and I think that question has been answered. No. They're not stupid. It's why we lost several ships to fire that should not have been lost. 1. They don't form the core of fire fighting teams and never will. 2. They're the first to start saying that it's not worth it. May well be true. One thing you can take to the bank? Don't take my word for it. Just look. How many warships did the USN lose to out of control fires in the last 50 years. If you think I'm cherry picking the dates, choose your own. In my day the ships would have been saved by drastic action but we seem to have lost that knack. Yes, there was no setting fire boundaries and smoke boundaries with all the shipyard hoses and cords running through a hundred watertight doors. In my repair lockers the bolt cutters would have made short work of cutting them and establishing the required boundaries. Various compromises were made along the last 50 years that compromised the hard lessons of fighting shipboard fires. These sorts of thing seem like tiny incremental steps. OTOH, every single lesson learned fighting shipboard fires cost men and ships. Now? We just write them off.
Posted by HMS Defiant at 10:28 AM