A WISH AND A PRAYER 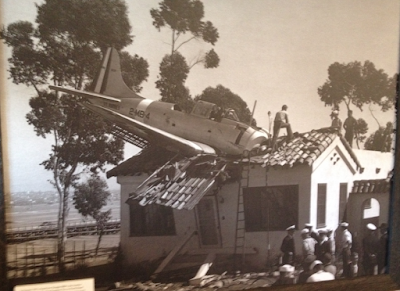 As the Biden term goes on I find myself hoping that America is as tough as both that airplane and that building it landed on. Both of them appear to have survived what should have been catastrophic damage but then it might be that things only appear that way. Given the sheer numbers of aircraft we had when this happened and the enormous number of buildings we had lying around it would not suprise me to learn that both were scrapped after they pulled the plane off the roof.

Some people are a little concerned about the gasoline shortage caused by a silly cyberattack on a pipeline. I don't watch any news anymore but has anybody expressed concern as the impact of the loss of one pipeline has shown Americans a vulnerability it little knew existed and perhaps mentioned that the Democrats endless interference with the construction of real infrastrucure may end up hurting a lot more people than they think? Keystone pipeline springs to mind but so do many other projects that got short shrift from the people who are jacking us into stagflation so fast our heads will spin.

The democrats and Congress and the Fed have ruined the economy beyond the dreams of Marx, Lenin and Stalin combined. The idiot boffins running Foggy Bottom have smashed a peace in the middle east that was negotiated successfully by the last administration and now they get to watch as their peaceful partners shoot literally thousands of missiles into Tel Aviv, Jerusalem and the rest of Israel while continuing to send the PLO hundreds of millions of dollars. China is on the warpath and it is quickly becoming apparent to all that the United States can no longer dominate the Pacific as it has for the last 70 years. There is no winning a war with China. We never won the current one that is still 'active' in Korea. We have an armistice. People have forgotten what an armistice is, what it actually means.

We know how the armistice that ended the First World War ended. The armistice that ended the Korean War is still in effect mostly because there is little to gain by fighting in Korea but there is no reason to believe that China got considerably weaker over the last 70 years. Its attempt to achieve commercial dominance in key sectors of our industry may have been frustrated but there is a very powerful area denial Navy that can now counter the very best that the USN can send. Gone are the days when our carrier battle groups with their long range strike aircraft could range the coasts of China and punch hard much further inland. We haven't really adjusted our thinking about waging war in a non-permissive environment since the end of the Cold War. That's almost 30 years of men reaching the pinnacle of military rank and power having the most limited understanding of what real war is and what it costs. While they jigger the facts to suit some congresscritter's idea of equity and fairness by adjusting unimportant things like the Army combat fitness test it is proving harder and harder to believe that the services truly have the metal or the toughness to wage war on a grand scale. I think the USMC and Army brigade combat teams can stand up to the job but in the absence of the overwhelming control of the sea and air they are not in any position to fight on the far side of the Pacific.

The USN can't surge a single battle group at this time and hasn't been able to for almost a decade. The ships not actually at sea are in deep levels of maintenance lasting for years which means the Navy is endlessly extending the deployments of the ones that can put to sea. That means there is NOTHING behind them.

I suppose now might be a good time to return to studying the fate of the ABDA fleet. How does a nation make war far away when the means to do so are so constrained and likely will be for years? If the nation accepts that it cannot fight then what concessions will be wrung from it before it finally does come down to missile exchanges at dawn?

I wish that our leaders were cognizant of these matters and taking some drastic steps to make things better and I pray that they pull their heads out before the Chinese and the other's decide that once again they can attack because they think they can get away with it.
Posted by HMS Defiant at 3:58 AM