Well, this is what all the fuss is about. I'm not sure exactly why beyond the idiotic left's idea that this sort of thing will be required within the United States in order to go about our daily lives. I've had one of these since shortly after I was born. The one here is not the last one but the one before it. As you can see, as with all government and international government type documents it is competely worthless except to make the various bureaucrats at the frontiers happy. The last one is in my medical record somewhere around here. I can always tell it when I see that happy white folder because it was in my bag when I traveled home after a month in Portugal and one of the 12 bottles of Port smashed during transit staining it a nice pinkish damp shade. That record had all the shots I had in my life entered into it after early 1996. One was needed to enter the kingdom back then and I had a lot of business in the kingdom.

As you can see, these are impossible to forge or update at home with a pen and these have been around since at least early 1960 and are just as valid for their purpose as the International Drivers License is accepted everywhere in the world and you can get one for $10.00 at any AAA office. Who can beat the cachet of the World Health Organization? 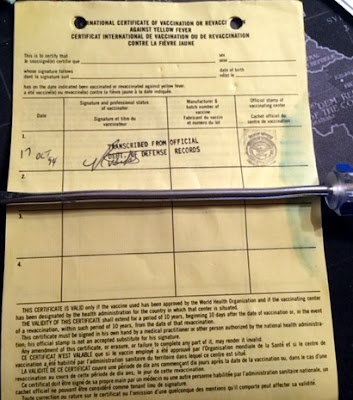 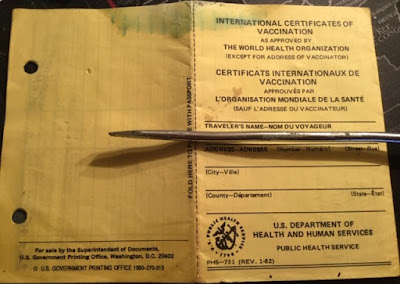