We have all heard of the woes of Chipotle and the repeated outbreaks of food borne illnesses from that chain of weight loss clinics masquerading as fast food outlets. Have you ever wondered why they keep getting hit with repeated bouts of e-coli, norovirus, lysteria, etc? Perhaps there is a former nuclear missile command site, long abandoned in North Dakota and one of Chipotle's enemy franchises is waging war on it's competitors.

The suspicious killer outbreaks of e-coli at Jack in the Box, the Chipotle disaster, Whole Foods ready to eat food?  All of them were targeted by the FFSF. Fast Food Strike Force operatives got themselves hired at each of the enemy food stores and then dosed themselves with everything from norovirus to typhus and cheerfully went to work everyday and never washed their hands. Ever.

Little surprise then that some food store chains are surprisingly untouched by loathsome food borne diseases and others are hit again and again. It's the armegeddon of food wars and you don't even see it happening except that the casualties keep showing up in hospitals all over America. 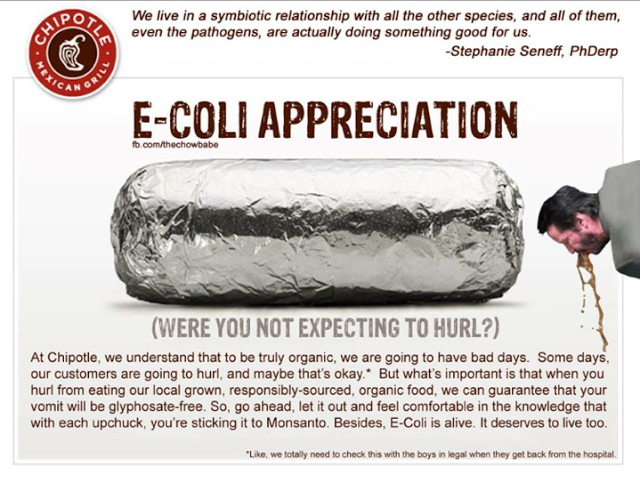