I was reading somewhere today that the International Astronomical Union had taken the trouble to organize themselves a body of concerned people to sit down and rename the stars. They did it for the best of reasons; they tell us. They claim that by simply renaming stars it would eliminate the confusion people have who cannot tell stars apart because the spelling is different and that throws off navigators, astronomers, birds and concerned people. 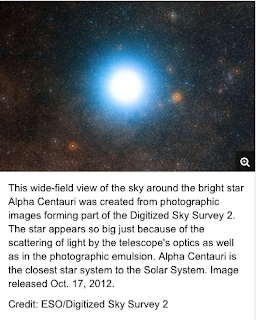 This doesn't really effect us but they decided to rename one star in particular. The nearest star is to be renamed in order to eliminate all that dashed confusion and concern. Alpha Centauri will now bask in the light of its new name, Rigil Kentaurus. Read it and weep.

It seems easy enough doesn't it? They have named it Rigil Kentaurus. Nothing could be simpler. All one has to do is change all the text books, all the navigation publications and stellar almanacs, nautical almanacs, air almanacs, star charts, etc and match the old star with its new name.

Space.com shared the name change in its report of 28 November 2016. I'm just a slow reader. 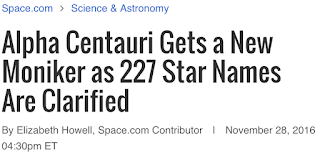 I'm never gonna remember its new name, but that's OK. Rigil Kentaurus is not visible anywhere north of North 29° Latitude. The last time I saw it was in 1984. I'll have to go a long way out of the way to see it again. In the meantime, I can tell people that I saw Alpha Centauri before it went away.
Posted by HMS Defiant at 5:00 AM
Labels: Labels, navigation, shiny