A little evil has passed from the world with the death of Fidel Castro. He will not be missed. There were other revolutionaries that took power during the long Cold War between the US and the USSR and Castro was not the worst.

I took a few minutes to look at YOU TUBE and watched the films that showed Havana and Cuba back before Castro took power and set about destroying the country as only communists can. The sad thing is that I decided not to use any of them here for the simple reason that I live now in MetroParkCentralis and once lived in Detroit. Right about the time that Castrol took power and started driving all of Cuba (minus Guantanamo) into the ground, Detroit and Cleveland were still thriving industrial powerhouses. Sadly, the world changed. Some might see in this the dead hand of globalism steering American industry and jobs overseas to Japan and the Asian Tigers.


Detroit was, in 1950, 1,800,000 people with the highest per capita income in the United States. Fifty-eight years of bad government, bad policies, high taxes, big regulations.  Failure of the police force, failure of the education system: Detroit today has about 950,000 people, and ranks 66th. What’s the answer been in Lansing by the state government under liberal Democrats? It’s been to raise taxes, increase bureaucracy, take care of the unions. So they’re actually accelerating the decay of Michigan. (Newt Gingrich interview to which I've lost the link.)

It's interesting to reflect what did the damage to the economies of both Cuba and the formerly successful cities of America's rust belt. If you read the two links to "Detroit" you will find an answer that I think covers the situation here very well.

The major difference between Castro's approach to dissent and that of the new Rust Belt Urban Elite (RBUE) is Castro jailed his dissenters or killed them and the RBUE just made it so unpleasant that anyone that could leave, did, and left the rotten core of the former industrial heartland to the progressives, socialists, communists, UAW, SEIU and democratic party politicians.

I'll be curious to see what a 'businessman' President's take is on normalizing relations with Castro's brother's Cuba. I envision a few changes and perhaps the introduction of some more sticks. OTOH, he may also sweeten the pot and tell the ruling class there that they can live, if they leave. I mean, it would be a 'coup' (sorry, I couldn't help myself) for Trump to introduce some weapons and trained soldiers into Cuba to roll up the country in a genteel and open-handed sort of way. Kind of like we rolled up Grenada, Haiti, Panama and the rest.*

Let's remember that Noriega, former President of Panama, rotted in a federal prison here in the US because a President of the USA decided to collar him for drug running. He is now rotting in a Panamanian prison in somewhat less salubrious conditions.

In the grand scheme of things Cuba has lost little by its diversion into socialism. 70 years is not long on a timescale that starts back in 1492. The Cuban people have had better and worse government over the last 5 centuries.

*Once ashore they'd start delivering free Ring Dings, satellite TVs, wifi routers and computers and the rest of the things people seem to want these days. This is sort of what I envision happening to the DPRK soldiers if they ever do cross the DMZ and head into the Greater Metropolitan Seoul Area-- they'll stop and loot and eat and loot some more and eat and drink until they pass out. I doubt they'll even make it to the north bank of the Han River.

Still, it's nice to be able to say that Fidel Castro is finally dead. Let the celebration mourning begin 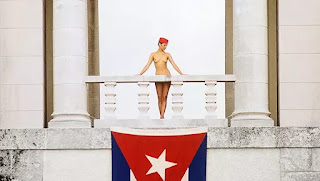