It seems America's Navy is not alone in losing any knack it had for building warships. Our sad ships of this century include the Littoral Combat Ship, which, as a Class, suck in both variations and include the recently commissioned Zumwalt, first of the 3 ship Zumwalt Class of Land Attack Destroyers which was recently disarmed when the Navy refused to ask for funds to purchase the Land Attack Munitions for the ships and the troubled bleeding edge Air Craft Carrier, Ford which cannot launch or recover planes and has other engineering problems that keep her years away from Sea Trials and a Commissioning Ceremony that brings her into the Navy.  Nope, we now have the Type 45 Destroyer of the Royal Navy being towed back into port two days after getting underway on its first mission. 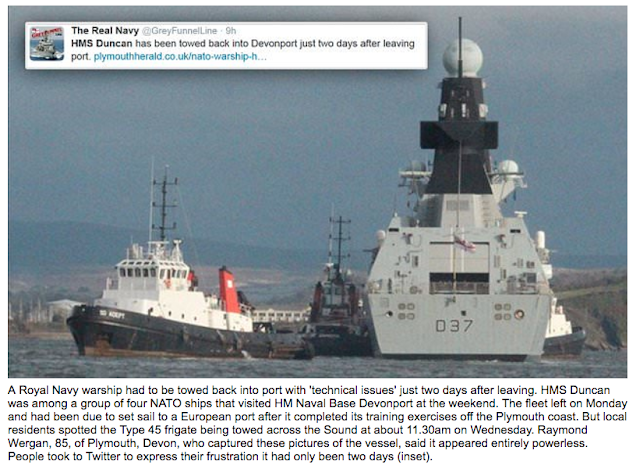 You wouldn't think real ship building was such a perishable skill.
Posted by HMS Defiant at 12:03 AM