Long ago and far away I was serving with the Mine Battle Force Middle East. We were alongside the pier at BASREC for a few days of rest and crew rotation when I learned just how flexible the most cunning among us truly are for this is a true story about a man and his God.
On a small ship we did not have a chaplain so when inport we allowed crewmen to attend Divine Services at the Administrative Support Unit Bahrain where they did have a chaplain and all manner of other diversions. One man from the day's Duty Section asked permission to leave ship to attend Divine Services and vanished from our midst. We received a report on his divine progress from the Executive Officer who returned aboard ship from a trip about the town and demanded that I explain why a man in the duty section was seen sunning himself poolside at the Holiday Inn. The XO said that when he confronted the Petty Officer and demanded to know why he was off ship when he had the duty the man had the effrontery to claim that he was a Sun worshiper. 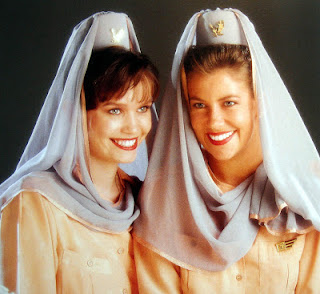 They used to sunbathe at that pool back in the day.
Posted by HMS Defiant at 1:59 PM