This letter has the same date but it is quite different from the letter I posted earlier. One can definitely draw a wide line of distinction between the cares and concerns of Operational Security dictates in this letter home from the current unreality. No effort is made to conceal or obscure the organization or affairs of the soldiers and armies at the front. Obviously the press was there in full force and this was a war with every facet available to the comprehension of any that cared to pick up a newspaper and read the news. I am still amazed that these letters moved in enormous numbers all through the war and with so little time in transport. My own mail sent to me here in Ohio takes more than 4 weeks to arrive from Arlington Virginia. My cousin was getting mail from Indiana to him outside of Nashville in less than 10 days. When did the Post Office stop considering that its sole purpose was to deliver the mail? It traveled faster and more reliably on wagons a hundred and fifty years ago.

There are two letters here. One a continuation of the day and the next from a week later as the Army of the Cumberland settles into positions for the Battle of Stones River. 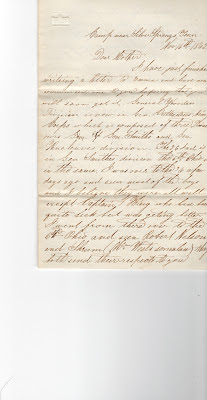 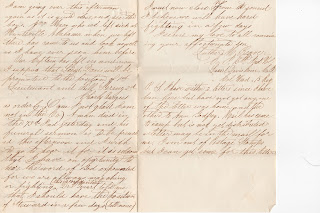 Camp near Silver Springs Tenn
Nov 16th 1862
Dear Mother
I have just finished writing a letter to Emma and have now commenced one to you hoping that you will soon get it. General Woodses Division is now in Gen Crittendens Army Corps which is composed of three Divisions ours Gen . Sp  Sen. Smiths and Gen Van Cleves Division.  The 36 Indiana is in Gen Smithes division the 6th Ohio is in the same, I was over to the 36 a few days ago and seen most of the boys and I believe they were all well except Captain King who had been quite sick but was getting better I went from there over to the 6th Ohio and seen Robert Nelson and Shrum (Mrs Wests son-in-law)  they both send their respects to you. I am going over this afternoon again as it is quite close and see the boys. Jno Macy who we left sick at Huntsville Alabama when we left there, has come to us and looks as well as I have ever seen him before.
Our Captain has left us and now I suppose that Lieut Davis will be promoted to the position of 1st Lieutenant and Bill Jersney 2nd Lieutenant and Charley Burgess as orderly. (I am most glad I am not in the Co)  A man died in the 73rd Indiana yesterday and his funeral sermon is to be preached this afternoon and I wish to go to hear it for it for it is seldom that I have a opportunity to hear the word of God expounded for we are always marching or fighting. (this is confidential. Dr Towers told me that I should have the position of steward in a few days (tell none) I must now close. From the sound I believe we will have hard fighting in a few days. I send my love to all remain your affectionate son
Luther M Beaver
Co I15th Indiana Volunteers
Lieut. Davis from Co. I
Lieut. Col Wood 15th Regt
P. S. I have written 2 letters since I have been here but have not got any, one of the letter was home and the other to Ann Godfrey.  Mail has come to camp but is not yet distributed a letter may be in the mail for me. I am out of postage stamps but I can get some for this letter.


Camp near Stone River, Tenn
Nov 24th 1862
Dear Father
I received a letter from you on the 22nd of this month dated 12th 1862 in which you stated that you had not heard from me for some time.  I cannot tell the reason why you have not for I have written 2 letters a week home for the last 2 or 3 weeks and the mail has been running threw for the last week to Louisville, Ky. We are now camped 8 miles southeast of Nashville Tenn. Anything can be sent to the Regt by Express to Nashville Tenn. I must be in a hurry about writing this for a blank has just been brought in to make out a quarterly report on I am well and still remain your affectionate son Luther M Beaver
Posted by HMS Defiant at 5:07 PM