Way back in the early days I posted a very brief point about watching America elect a team of people who seem intent of jiggering the cart-o-progress until the wheels fall off and the engine drops out. I think they did that with Health Care and Energy and the Banking System, and the Justice Department and I'm reluctantly afraid that in order to make things better for some, it must get worse for everybody else.
All this is true in spite of the obvious fact that this society also takes very good care of most of the people in the country. I see those that have thrown themselves through the cracks in our society through madness, drugs and alcohol and greatly regret that little can be done to help them or improve their life but I also don't believe that we have a duty to lock up people too messed up to look after themselves. I mean how would that look if we just locked up all the progressives and democrats and socialists? Nope.
But watching Europe as it implodes is rather fun. In terms of economics and state policy there is literally NOTHING that has not already been done multiple times in the past and anybody who reads history knows what happens when a nation allows its banks to collapse. The countries finances are simply out of control. Nobody even TRIES to exert any meaningful control over spending anymore. Europe placed an iron grip on its banking system when it adopted the Euro but it failed to regulate the out of control spending and now we get to see insolvency played out on a continental stage.
When I lived in California it was easy to see the state slipping away and the little towns and the little cities and the little counties led the way into debt and municipal destruction. Cities like Detroit are toppling and it looks like Birmingham will be next. All of a sudden you can read about all the outlying suburbs of places incorporating defensively so they won't be part of the ruin when the big city slides over the brink. Remember when Chrysler only needed a billion dollars? Remember when New York, New York only needed a billion dollars?
Those fools in Europe's commission determined not to honor their promise to insure all deposits under 100,000 Euros and insisted that all deposits in the banks of Cyprus must be robbed in order to have the EU step up to the plate and bail out the banks for all the monstrously criminally stupid loans those banks had made to Greece and other insane risk borrowers. The question in everyone's mind in Europe then must be, how can I trust my banks and my country and my EU to honor their promise to keep my money in the bank safe? Where can I move it where it will be safer? When Argentina did this it did not go well at all.
I live in what was, in the last century, the fifth largest city in America. Home to the first billionaire in the world. They used to make EVERYTHING here. It was very badly managed and it went broke and most of the jobs and industry vanished. The billionaires and millionaires all had mansions in the city but they instructed that their mansions be destroyed after their deaths because they did not believe anybody who came after them would be able to or could keep them in the required style. 80 of 84 mansions were leveled. Is there anywhere else that did such a thing? The mansions still stand in Newport but nobody built mansions in downtown Detroit.

"Here are the Wimsey arms, from the cover of C.W. Scott-Giles The Wimsey Family (the "Dorothy L. Sayers" across the top is obviously not part of the arms, but I wanted to present the color cover rather than the b&w illustration from the book's interior)."
from:  Win Scott Eckert 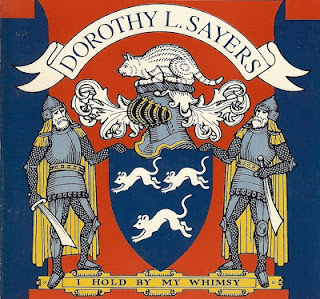 And for Anne Bonny 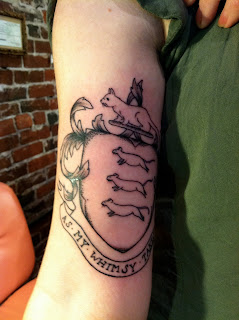 The old saw remains as true today as ever, "if I owe the bank a hundred thousand dollars I'm in trouble. If I owe the bank a hundred million dollars the bank is in trouble." Thanks to our actions in the S&L fiasco we are left with banks to big to fail. Do any of them still loan government any money? What kind of interest rate do they charge on it? Have you read about the bonds issued in California towns and other places desperate for cash that promise to pay back a measly 80 million $ loan now with over a billion $ since it is arranged so that the municipality won't even start paying interest on the loans for 20 years?! They are doing this to their own children and grandchildren never mind that they do it to themselves. To quote prostetnik vogon geltz...death's too good for them.
Posted by HMS Defiant at 5:00 AM