AND NOWHERE A PEEP FROM THE SHEEP

Interesting articles today from both The Atlantic, again and Zero Hedge . They're both interesting and tell the story of things in a way calculated to make you wonder. The article by The Atlantic strikes home because, well, it's where I live. 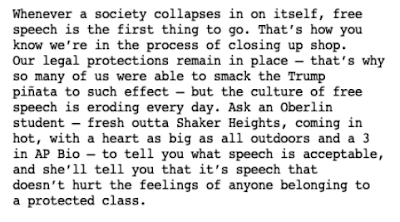 When all else fails, when no amount of made up facts, fake argument or holding their breath until they turn blue works, the liberals always opt to censor speech that they disagree with. They're kind of hateful that way. What really makes them suck is that they feel so brave and adventurous when they're out there swinging the clubs bashing the people who choose to speak up and disagree with them.

Then there was this:

There was no mention anywhere in the article about the cost that ordinary Europeans are going to pay for their future because why bother? They could end their sanctions on Russia tomorrow and find their energy prices slashed all the way back to the normal levels and LEARN FROM IT!!!!! Or they may continue on like little lambs to the slaughter. No mention either of course about the plastic manufacturers that must shut down because they won't be able to afford the energy costs and thus the loss of packaged meat and vegetable sales in the markets since without plastic there is little left to buy outside the farmers markets and we see where the Dutch government wants to bury their farmers. Right up their with New York in their disdain for the working class.

It's a great pity that nobody warned all those Jews living in the East that Germany meant to exterminate all of them too and not restrict themselves to the German Jews. Do you think we should warn the Republicans that remain in New Jersey, Connecticut and Massachusetts? I love Rhode Island but I doubt there are more than 4 Republicans in that place.