Alawee snatched her butt for the third time that morning and shrieked in pain. "Dammit that fuckin hurt!" It was not new but it was always painful, the continuous jabs in her butt from where, only the ghosts knew. She pulled the dart shaped spear out of her ass, looked at it blankly and tossed into the bushes as she continued to feed on the berries and the random frogs that lived in the bushes.

She didn't know it. It had been happening ever since she reached puberty, but the darts and other things sticking into her over the last few seasons had grown intensely wearisome. She hated them all. There were large darts, small darts, round things and even phallic probes she dreaded in the night.

A day and a night in the life of genetic eve.

Wouldn't you know it that anthropologists would be the ones to develop time travel first and always head back to suss out everything there was to know about a not attractive female but nevertheless the go-to-girl as the last of her species on planet earth 69,235 years ago. Mitochondrial Eve. 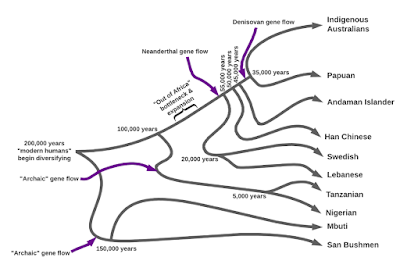 The deep dive into the history of us is always fascinating to me.
Posted by HMS Defiant at 2:01 AM