It mostly works for women and not at all for men. It's a process innate to the zygote and all humans. Somehow, nature leaps out of the bushes and tries to suppress the bad genes on the X chromosome. With girls there is a redundant X chromosome. Guys get a Y instead of 2 Xs. So, yes, girls are really born with two strikes against them. I delve into history in the late night. I'm fascinated by it. I was looking tonight on a dark subject that my reference to time travel brought back.

The distant progeny of Queen Victoria were a maelstrom of disfunction on the male side. On the female side, not so much. In another century that saw the brutal extinction of a hundred million people in the name of various isms, I do miss these girls. 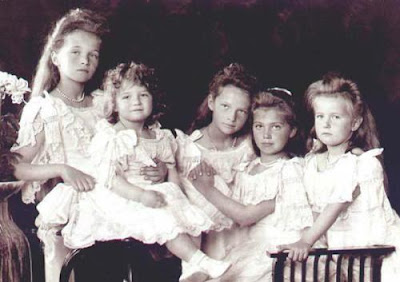 Imagine a 19th century in which they were not snuffed out by communists and the regime actually survived for another hundred years similar to the elder house in Britain. It's no longer Great but it was once.

On balance and historically not much was made of the princesses. They mostly vanished. On the other hand, I would have liked to have seen the Angevin World of Lord Darcy and any one of those girls was easily a hundred times brighter and smarter than Kamela. Yeah yeah, they had bad genes, that's for another post.
Posted by HMS Defiant at 12:39 AM