English is THE language for international aviation. All such pilots and flight controllers and such like must speak English. Not French, not Russian; English. Who knew it included those who engage in the most foolhardy and stupid miracle of flight? A tragically young Dutch national, 'pilot' and a Spanish, 'groundcrew', miscommunicated in English with tragic result. 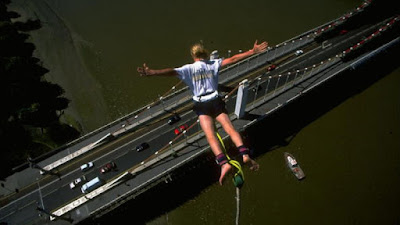 I once had a Petty Officer in my unit who originated in South Africa. She and her friends went bungee jumping shortly before she emigrated to the United States and joined the Navy. They all jumped and the man behind them then jumped. The rope broke.

In hindsight, I did some rather remarkably stupid things when I was young. I used to fly light aircraft in college with my friends and we'd fly to Cape May every so often and spend the weekend gambling up the beach at Atlantic City to make enough money to pay for the plane and the gas. I used to fly with a fraternity brother who was building multi-engine hours towards his ATR. We'd do spins and stalls all over central Pennsylvania on weekends.

As I look back, one can only agree, that ignorance is bliss.
Posted by HMS Defiant at 7:30 AM
Labels: Blithe Spirits, Dangerous