They said they wanted back their weapons. This was a stupid article and not well written. I am almost forced to dig up a copy now of Red Storm Rising and I owe my girl a copy of Das Boot but how do people just put out nonsense like this? 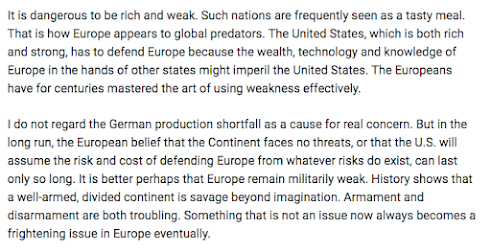 As we are seeing today, without US you only get one chance to stay free and independent. And we also shipped most of our weapons to Ukraine and aren't building anymore because. All those countries like France who used to rely on the bedrock of the US military fighting for their freedom should start to think about what post-Trump really means for them and invest in all those hateful weapons dealers industries. This hasn't been the 20th century for over 22 years and there is nobody in America that would shed a single red corpuscle to bail any country in Europe out of the deep hole it has dug with such smugness and pronounced hatred for America for the last 80 years.

The last time I looked the 173rd Airborne was in Aviano but that was 13 years ago. They might well have left. But that's OK Europe because there will never be another war in Europe.