THERE'S A NEW BLOG ON THE BLOGROLL

It's probably not new. Probably been around for a hundred years but new to me. I like it. 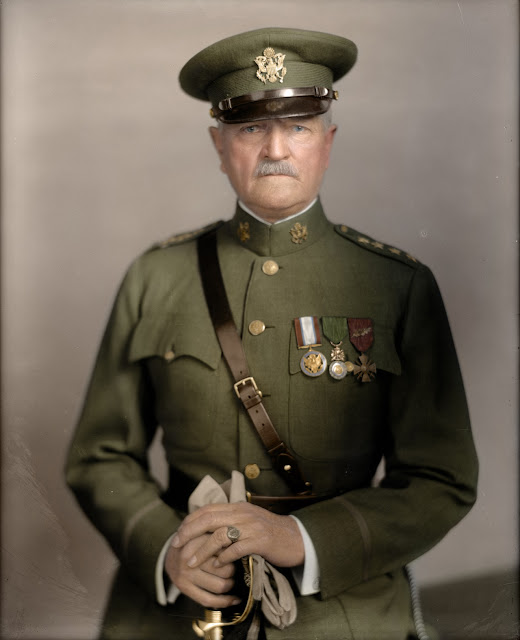 Yep, a picture of Black Jack Pershing. I like it for a couple of reasons. It reflects the man as he is/was. And I like that once upon a time, a 4 star general of the armies was able to wear just 3 medals and because he was a soldier of ours, there weren't enough actual medals to make up a ribbon bar of 3 so he had to wear some French doodad and some other doodad from some other country, mabye even Belgium.

I followed the example of my dad and his dad and just wore the 3. That was enough. I still remember EN2 Anderson asking the Commodore if we would get any medals once we went to the Persian Gulf and started sweeping mines. This was back in the last millenium and as Anderson said, he'd been in the Navy for 5 years and still didn't have a single medal to show for it. By the time he got back from the Gulf he had 3 rows. It was a medalish time and there was a war you never heard of there. Praying Mantis. Me? I'd already spent time sweeping mines in the Red Sea and a year in the Iran/Iraq War Zone and I had two whole ribbons but none of your actual medals. 18 years later I learned that we had been awarded the Humanitarian Service Medal for our actions in the Red Sea. And there, I thought it was nothing but a complete waste of time.
Posted by HMS Defiant at 5:29 PM