A NEW FRENCH NAVAL BASE

From the admirable folks at gcaptain comes news that the French are to stand up a naval headquarters in the United Arab Emirates to serve as the European Headquarters for their newly assumed duties assumed by them and some of the usual countries, as being in charge of ensuring the safety of some shipping in the Persian Gulf. As you can see, they've given it some thought.

If they had been cleverer, the arabs could have suggested that the logical place to set up a headquarters to oversee the safety of navigation through the Strait of Hormuz would be the UAE islands discussed here. Abu Musa and the Tunb islands have been occupied by Iran since 1971. That of course was before the arabs learned the essential lesson of hanging together or getting hanged by Iran. It was also, sadly, about the time they really started making Americans angry with their OPEC strategy to cripple economies worldwide. 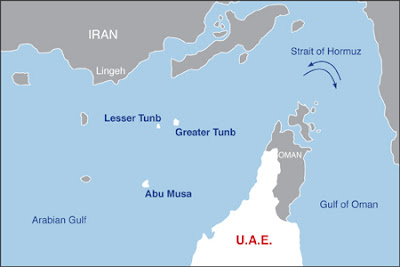 On the other hand, I think it is only we and the Russians who believe in the truth of things expressed by the old saying, Go Big, or Go Home. On the gripping hand, we are talking about the Europeans and they spare no expense in building headquarters and why not plop it down in the premier go-to resort city in the Middle East? Have a look at the article below.


A French naval base in Abu Dhabi will serve as the headquarters for a European-led mission to protect Gulf waters that will be operational soon, France’s defense minister said on Sunday.

France is the main proponent of a plan to build a European-led maritime force to ensure safe shipping in the Strait of Hormuz after tanker attacks earlier this year that Washington blamed on Iran.

Tehran has denied being behind the attacks on tankers and other vessels in major global shipping lanes off the coast of the United Arab Emirates (UAE) in May and which increased tensions between the United States, Iran and Gulf Arab states.

The command center will host around a dozen officials representing the countries involved, she said. In a speech to French military personnel, she said the next time she visited the base she hoped the mission would be operational and thanked the UAE for supporting it.

The UAE has tempered its reaction to the attacks and has called for de-escalation and dialogue with Iran.

On Saturday, Parly said the initiative could start early next year and around 10 European and non-European governments would join, pending parliamentary approval.

You probably noticed that it said that perhaps 10 European governments would join but as usual with the Europeans there was not a peep about how many ships, armed aircraft or coastal missile batteries would be sited in the Strait to safeguard whatever it is they consider essential shipping.

There's a marvelous HQ up in Bahrain which is host to the US Fifth Fleet, Naval Forces Central Command, some sort of Joint/Combined Maritime command that serves as host to scores if not hundreds of Europeans there to keep an eye on things and improve the quality of coffee served in the break room.

One of the worst commanding officers I ever worked for had this really obnoxious saying that he kept telling me, "if you take care of the small things, the big things will take care of themselves." I was in the process of realigning two main engines and my #1 generator with the Diesel Inspector and was somewhat undermanned. OK, hideously undermanned. With the Europeans on board in the Persian Gulf I'm sure that we and the arabs have in hand the perfect crew to take care of the little things and leave the big things to US.
Posted by HMS Defiant at 4:36 PM