I see the worthless Mr. Vindman prefers to be addressed by his rank. It reminded me of a long ago day in the Pluck realm when the skipper came down to address us all (junior officers that we were) and so was he by Navy tradition, right up until he pulled off his collar devices and handed them to me and told us that he was now a real commander and nothing like a lieutenant commander anymore since lieutenant commanders, lieutenants and lieutenants junior grade were all just lieutenants. I found him one of the most relaxing CO's I ever worked for. What he was, through and through, was a solid professional who had your back and you knew it. He had character.

He finished his time as Technical Director at one of our SEACENS on the east coast. I daresay a lot of people were really unhappy with him there. He had a hasty way with idiots. I think he raked a battleship with CIWS during the gulf war part 91.

I saw the crossed rifles on the worthless scum testifying in Congress and wondered enough to break out my own set of crossed rifles. They are mine in the sense that I own them but they were my grandfathers. When did the Army change from putting the numbers on their crossed rifles? I'm guessing it was sometime before the War back when the Army was small enough it was like the Marines and one could say, I'm with the 1st of the 5th and guys who know, would know. 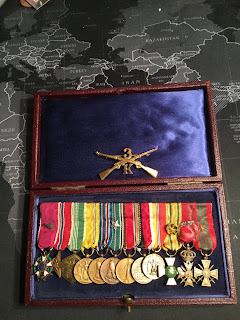 I was on the fringes of the 1st and 2nd divisions but never served with either. Still, I remember well the Big Red One when they got home to Fort Riley and the Indian Head, the first much more fondly than the latter. If there was a way to screw troops by the numbers what 8th Army didn't think of, you could count on USFK to implement but for all of that, one thing I don't recall seeing at Yongsan was 2nd Division HQ. No doubt it was there over by the helo pads which I never went to since everything needed for life was at Dragon Hill and my meetings were in the theater.
Posted by HMS Defiant at 12:56 AM