THE NEW IRS TURNS ITS GAZE TO YOU OBAMA

I don't doubt the truth of this article from the UK press. It looks like Obama is assembling all the tools and henchmen any revolutionary needs to wage overt war against the legally elected government of a democracy. It will be fun to see him and Jarret audited every year from now on by impeccably honest IRS agents and it will be hilarious to see what documents "turn up" from the archives of the State Department and the State of Hawaii inre Mr. Obama's foreign travels, his peculiar social security number from a state he never lived or worked in and other little discrepancies that have come to light over the last 10 years. It will be illuminating because we all know that Mr. Trump is not a man who suffers petty insults and personal attacks by turning the other cheek. 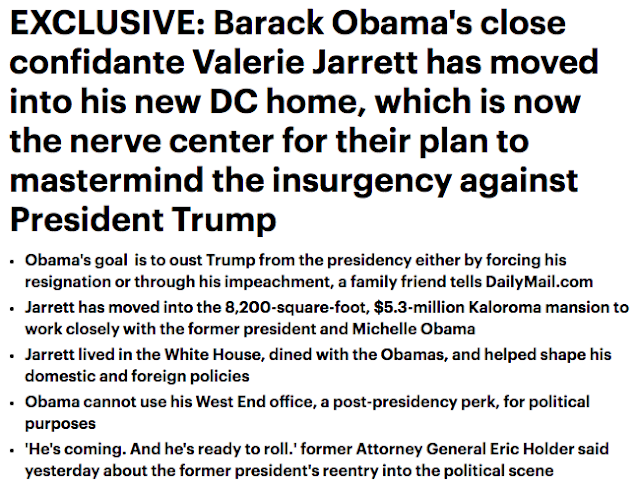 It's not too late for any or all of these scumbags to go to jail. I'm looking forward to it because I know something they don't know.

Trump will have them destroyed by the organs of State that they weaponized and while everyone will know that he did it, they won't be able to prove a thing or trace anything back to him and decades of lying to the people has ensured that only a handful of rabid believers actually believe anything reported by the journolistas of the media. The democrats "friends" have outed themselves as enemies of the truth as thoroughly as Fidel Castro, Kim il Sung, Mao, or Joe Stalin.
Posted by HMS Defiant at 5:30 AM
Labels: America, Palace News, scum, Stupidology