THE GOOD OLD DAYS AND NIGHTS

Remember the last century in the last millenium? I do. It was a different kind of time where accusations didn't lead to automatic death sentences unless they were solidly backed up by proof and unfounded, unproven allegations while enough to ruin a career didn't result in jail time in criminal convictions or cancellation of all that had gone before. I wasn't at the event in question but I bought the patch for the significance of the trauma that event put every naval officer thru because of the Navy/Marine one-size-fits-all 'justice' that was in it. Surface warfare types don't attend Tailhook for one obvious reason. Nevertheless we were hounded to swear and affirm that we weren't there and the originals of our statements were forwarded to higher echelons to be consolidated and used against us at courts martial if they could prove that we lied.

The patch was sort of a badge of honor among us because for all the sound and fury, only about a half-dozen junior officers were held guilty at non-judicial punishment of any misbehavior at the convention. The other 134 cases were dropped. Still it was a witch hunt that lasted far too long, swept up way too many innocent officers and destroyed countless careers of men that never even had a chance to argue their case as they were simply tossed on the scrap heap and left to wither away. 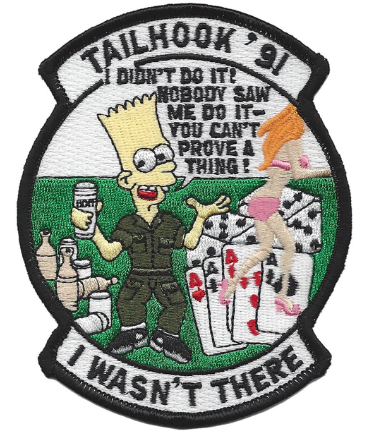 Nowadays, accusation alone is sufficient to convict unless you're a democrat in which case there is no case, nobody saw a thing and the media is uncurious and indifferent to the allegations.
Posted by HMS Defiant at 12:15 PM