I have enjoyed Kurt Schlichter since he started writing. His latest Townhall piece was a rare treat for all the senses. He is retired military and now a lawyer and he takes to his current profession all the gritty steely determination you could imagine in such a combination. You really should read the link.

I don't tweet or look at tweets but I enjoyed reading what Kurt laid before my eyes. I think President Trump is likely to find a judge disinclined to take any of the usual crap from the feds or from the DNC or from Hillary, and if discovery is granted they are not going to be stalled for year after year by howls of protest. They will be sufficiently woke to the consequences of that happening by the Fed's continuous rearguard defense of the indefensible and by the Steyn vs Mann goat rope going on in the  DC courts for the last 7 years. In short they'll find an adult court and an adult judge or the law is going to find itself coated in slime. 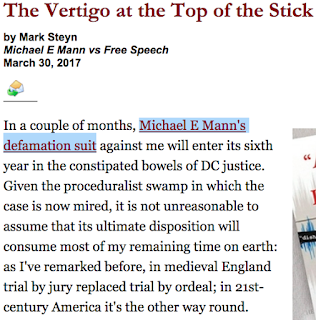 I am very much enjoying the prospect of President Trump launching a counter-attack in the courts against the massively corrupt and dishonest Department of Justice, FBI, DNC and Hillary. It is particularly enjoyable because not one of the so-called 'smart ones' thought about the utterly predictable outcome that comes from suing a man who has been tied up in law suits his entire adult life.
Posted by HMS Defiant at 12:52 AM