COFFEE AND BILE ON THE HELLMOUTH

I see that some Berkeley denizens are shocked that one of their favorite watering holes abruptly shut down overnight without warning because a complete non-entity remarked on TV that he was thrown out of the establishment 3 years ago because they thought he was harassing a woman and baby. The MIQ declared that he was harassing his wife and child - or words to that effect. However, the owner of the Elmwood Cafe must have the most finely tuned ear-to-the-ground in history and reacted to this revelation by instantly closing his shop, papering the windows and making it clear that he was out of business. He did all this that night because Berkeleyites got there in the morning expecting to find a friendly cup of Joe and a bagel and were met with locked doors and a CLOSED sign.

Imagine that. Here is a businessman perched on the Hell mouth, home to Satan and anti-fa who decides to skip the ritual auto de fé and just get it over with. Who really needs a bunch of jackasses barging in to a quiet coffee shop like this? Once is more than enough and Berkeley doesn't believe in such a thing as excess zeal. Were it to be found open it would have been burned down, such is the zeal with which Berkelyites and anti-fa deal with Enemies-of-the-State. 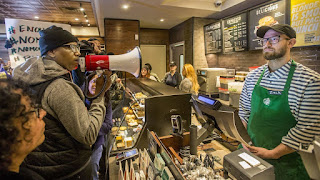