I have a number of letters written by one of the family who fought in the Civil War a long time ago. Tonight I thought I'd try to post some of the scans I made of them over Christmas. It may work. This was written to his sister fairly early in the war and comes from the first file of the letters. His unit was posted to a camp outside of Silver Spring, Tenn. Hopefully, the pages will embiggen if nudged. Wow, they look great on iPad. 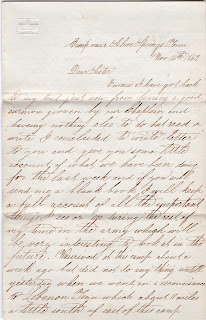 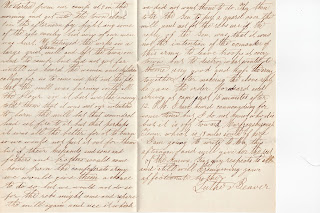 Here is smooth copy of the letter. transcribed as he wrote it one hundred and fifty years ago,

Camp near Silver Springs Tenn.
Nov 16th 1862
Dear Sister
Emma I have got back to my tent just now from hearing a good sermon given by our Chaplain and having nothing else to do but read or write I concluded to write letter to you and give you some little account of what we have been doing for the last week and if you will send me a blank book I will keep a full account of all the important things I see or see during the rest of my time in the army which will be very interesting to look at in the future. We arrived at this camp about a week ago but did not do any thing until yesterday when we went on a reconnaissance to Lebanon, Tenn which about 11 miles a little south of east of this camp. We started from our camp at 9 in the morning and got into the town about 1 in the afternoon by fighting some of the rebs cavalry but none of our men was hurt. We destroyed the works in a large grist mill and left the town on road to camp but had not got far until we heard the women and children calling for us to come and put out the fire that the mill was burning with all the flour in it but we (the enemy) told them that it was not our intention to burn the mill but that scoundrel had set fire to it but that perhaps it was all the better for it to burn so we would not put it for them but if their husbands and sons and fathers and brothers would come home from the confederate army we would give them a chance to do so but we would not do so for the rebs might come and repare the mill again and use it which we did not want them to do. They then told the Gen to put a guard over the mill and not let the rebs use it. The reply of the Gen, was that it was not the intention of the commander of this army to leave troops at every town but to destroy what would do them any good and keep the army together, after making the above reply he gave the order forward and arriving at camp just 15 minutes after 12 P.M. I have heard cannonading for some time but I do not know who it is but it is off toward Murfreysburough Tenn which is 18 miles south of here. I am going to write to Ma this afternoon and will give her the rest of the knews. Give my respects to all and still will I be remaining your affectionate brother.
Luther Beaver