I listened to the fake media on the way back from Rocky River with a carload of Black Bird cookies and they were slobbering in excitement at the possibility that Cohen might flip. I haven't seen such enthusiasm for a flip since I used to egg my brother on in the pool to try a back flip off the diving board back when we were kids and he couldn't quite pull it off. It sure looked painful though.

So, as I understand it from the People's Revolutionary International, Mike Cohen, the president's former lawyer is going to flip over something for Justice about paying hush money to a prostitute that claims to have had a liaison over 10 years ago with the man who wasn't president and who denies it and for which there is a stunning lack of evidence and which is not in any way shape or form a crime.

There might be those who would advance the argument that by denying it, they are obstructing justice. But it still isn't a crime and therefore there is nothing for justice to pursue and none of it bears any relationship to the imaginary FBI case that claims the Trump campaign colluded with Russia just like John Kerry is currently colluding with the government of Iran. 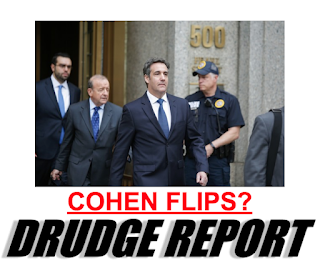 I had to turn the radio off again when I reached Lakewood since they had some guy named Amal come on and baldly state, without objection, that all republicans are racists, bigots and misogynists. The lame David Brooks impersonator, some woman I've never heard of, finally managed to interject and say something about McCain isn't a bigot but I stopped listening at that point.

I got a real kick out of this from yesterday's take. It pretty much defines where we get our Amals and Jennifers from and why they sound so lame on NPR.


The Left’s taste for intellectual smallness is a relatively new thing. No one would accuse Marx or his 20th-century followers of harboring small intellectual designs. What has happened to turn the revolutionary class to a preoccupation with paper bags and plastic water bottles? What turned the rightful heirs of the Great Terror into the apostles of microaggressions? Why has the vanguard of world history and multiculturalism suddenly settled into a fascination with the equivalent of collecting intellectual lint?

It's a good question but we know the answer don't we.
Posted by HMS Defiant at 4:12 PM