It's hard to believe how far the news services have fallen from the good old days when a newsman's writ was to ferret out the facts, record them and then publish them in a form that could be as salacious as they liked but which all bore the same hallmarks of news reporting: who, what, when, where, why.

Long years ago at the beginning of the War For Oil, the world's news arms banded together and decided to eschew foreign terms from their news reports. All killers and terrorists were simply branded, 'gunmen.' Gunmen were found to be gunning down various unworthy people all over the world without explanation or criticism. It was not, said the news mouthpieces, their job to explain what motivated gunmen or what made their victims so unworthy, so they stopped even trying.

In America, it quickly became apparent that the news apparatchiks adopted the new style enthusiastically because they were getting beaten up all the time for describing the people accused of horrible crimes or on trial for horrible crimes. The proletarian masses were quickly beginning to sense that an enormous percentage of the most outrageous violence was being carried out by a small minority of people. The news people felt a duty to cover that up.

In British news it wasn't hard to spot that the same sort of cover up was at work as the press labored mightily to blame things on gunmen or youths. Up until a few years ago some of the lesser news services still had the gall to refer to some vicious attackers as young Asian men in an attempt to muddle just who was carrying out most of the most vicious and senseless attacks.

I just finished reading the BBC's little bit of not-the-real-news about Gunmen attacking in Iraq. It wasn't at all about what I thought it would be from the headline but you can make up your mind from this capture. 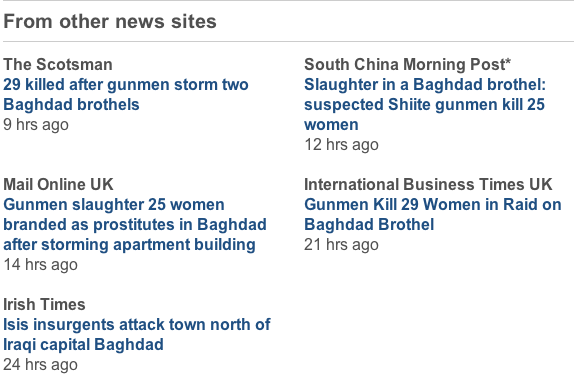 There seems to have only been one news service that saw fit to describe the attackers. It's OK though, the rest of the so-called news services found it acceptable to brand all the women killed as prostitutes. They seem OK with labeling some of the victims of these vicious attacks because, somehow, in their minds, it justifies the attackers.

Only the turnips at the BBC could write something this blandly stupid:


"The motive for the killings is not clear. No group has said it carried out the attack.

Reports said the two buildings were suspected to be brothels.

Writing left on the door of one of the buildings read: "This is the fate of any prostitution," AFP news agency reports."